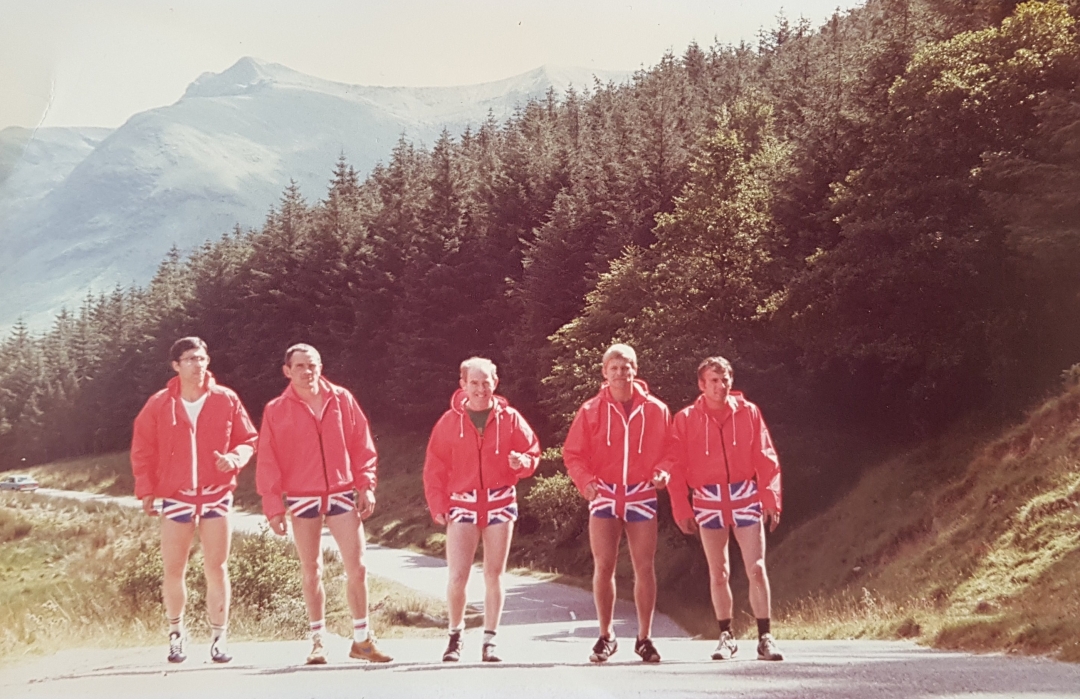 We are a mere matter of days away from undertaking a genuinely extraordinary challenge – running the National Three Peaks in relay, non-stop, with the aim of beating a record that has stood for over 35 years.

But how do you even go about doing such a thing?

I feel privileged to have had the opportunity to meet and chat to Pete and Dave Ford, two of the runners who set the current record of 54hrs 39mins back in 1981. The conversations we’ve had have ended up being incredibly useful for our own planning but also just plain inspiring. These guys have done a lot, broken and set a lot of records and as such I wanted to be able to share some of that inspiration, through their own words.

Dave Ford wrote a short diary of their record breaking journey back in 1981, which I’ve reproduced in the blog below. Hopefully it brings to life some of what this challenge is about and why it has intrigued me so much. Enjoy.

The scene from the bedroom window was like you find on a picture postcard, the mirror finish from Loch Linnhe reflecting the majestic mountains all around, the emmets were on the move, bustling along the main drag of Fort William. We were not here as tourists, this day had been planned many months before, this day was August 7th and at 1200hrs John O’Callaghan, Dave Robinson, Dave Ford, Kevin Duggan and Pete Ford were going to challenge the Three Peaks Record attempt – Ben Nevis, Scafell Pike and Snowdon. At 1100hrs the gladiators emerged from their various hideaways, having been put up for the night at friends homes. All had their favourite shoes on – flats, ripples, studs. However they all had one thing all had in common – Ronhill’s Union Jack shorts, appropriate because we were going through Scotland, England and Wales.

We had planned the first leg to the top of Ben Nevis 4406′ in three moves 1. Sea Front to foot hills 2 onto the Red Burn and 3 the top. Therefore number 3 had to be in position early and moved off missing the head man at Fort William starting the attempt in bright sunshine with little cloud, perfect conditions. About 70mins later number 3 was over the top of No1 mountain and now the worst descent of the three was taking place. The little black boxes strapped to the side of the runners were a present from the University of Salford, there to register the heartbeats of the runners as they did their bit. The readings, unbeknown yet, must be interesting to say the least at this stage. We must thank Rocharbor Athletic Club for providing the excellent guides in the two Rodgers (Roger Boswell and Roger…), the remarkable Eddie Campbell and company.

From Ben we now had the long road run down through Bridge of Orchy, Crianlarich and as the evening light started to fade the long 21 miles along Loch Lomond. At around 2400hrs the most difficult bit was getting through Glasgow. The Gorbals certainly living up to its disreputable name, with gangs of drunken youths lining the route. Suddenly we were straight in to a bottle fight, cars screaming along pavements, beer bottles flying and with a slight increase in pace we moved on. At this stage we were just going into our 1 hour sessions, allowing the rest of the runners a possible 3hr kip although this never took place. As sleep started to look possible a panic came across the van, John had been about to finish his leg and was now lost. He had come across a pedestrian precinct and was told to go straight through by the local guide, who was a non-runner and had not allowed for 6min mile pace, as such he was gone. We know he would not stop running and Hamilton and the A74 would be his aim but, it took another hour until he was found much to ours and his relief. John wanted rest and as much as we could give so the hour legs continued, with the extra 30mins session John had now completed. He was back in the pack and not to much the worst for wear and moving along as if nothing happened, the stalwart that he is.

The danger with slow moving vehicles on main road in and weather conditions doesn’t have to be described or danger pointed out. But, if not for the vigorous attention of our one armed driver Nobby, the attempt would have ended there. The only thing that felt wrong was the rapid gear change and the accelerating forward, from the rear window the AEC on the radiator grill as the 30ton monster missed us by inches, the driver fighting to control the thing. We were glad to leave the A74 at Carlisle and head for The Lakes and Scafell Pike. The route was somewhat undulating to say the least. At Keswick we could see the mountains were not to welcome us, rain and heavy cloud hung like shrouds. Kevin Duggan had been selected to take this one and moved forward to try and gently ready at his leisure. Things moved fast and having made contact with the famous Joss Naylor MBE at the foot of Borrowdale, Jos and Kevin were on their way across. A long road drive back via Keswick, Grasmoor up into the Langdale Valley to wait. It was a battered, wet bedraggled but jubilant Kevin who returned, having taken a few tumbles, skin broken, but no bones, black box with wires pulled out but No2 taken on and on to the final goal. As we left Windermere the second night descended upon us and we were back on our hourly runs but nature calls as nature calls and the runners split the difference taking alternative half hour turns for 5mins with no panic or rush, heaven!

The next barrier if any was the Runcorn Bridge because from here we know due West was Snowdon and the last leg of our journey. We crossed just after first light with the sun on our backs but 2hrs behind schedule, the record touch and go. The route now cross-grained over hills and valleys, which were very pretty but hard going. The team really pulled together for a final burst and at times the determination and aggression became worrying to say the least. Suddenly there’s the A5 and everyone knew we were on home ground but, the problems were not over. The man chosen for the decent of Snowdon had to move to catch the last train up and to alert Ken Jones, the celebrity marking him in on top, another runner needed to rest or prepare himself for the final ascent. This left three team members to tackle the run in from Betws y coed, anybody who knows that route up via Capel Curig and then the climb to the Pass of Llanberis is no mean feat on its own and to be two men down as well. Myself, I was on the train to depart for the top, I couldn’t quite share the excitement of the people who were going to climb the highest mountain in Wales from a seat. My problem was that I didn’t get cramp on the fast decent down because this was going to be my final effort the big push shift or bust down in sub 30mins from the top. Cold and tired and not much clothing for the elements, a figure in white ascended fast – only one man could be going that pace – a team man. Ken Jones was on top to witness the touch and off I go like the wind down. By the time you reach the road section the legs are on the way out, but there’s no way of braking either, so its controlled falling really all the way to the bottom of Llanberis and The View Hotel.

The other team members are ready to take over but there was no fifth man so its back on the road, flat out to Caernarfon with the Salford Team in hot pursuit, chasing blood urine and heartbeat. There was plenty of them on the last leg, but must say here what a great job they did always there cheerful words hot coffee, nice people. With a police escort in to the final mile and the Castle. 50yrds to the sea we stood with out feet, 470 mile 54hrs 39 mins 14 secs of running and its over suddenly there’s no need to run anywhere! Maybe just a thank the back up boys – the ones with the numbing tasks or recces, foods, finances, routes, short cuts, no sleep as well driving at 6-7 min miles – makes you wonder who had the worse job. It’s like the panto horse, the end result is pleasure for someone else – we helped raise around £1,000 for Jimmy Savile we haven’t got back backs and touch wood we wont but if we do its not a bad thing we did to help.

Support the Run the Peaks challenge

If you’d like to support the team and donate, helping them to reach their £5,000 fundraising target in aid of Make-A-Wish UK, Mind, Defence National Rehabilitation Centre, Run 4 Cancer and Brain Tumour Research, you can do so here;