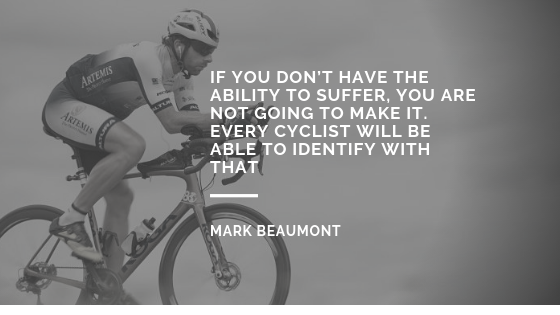 Sisu is a Finnish concept, a word used to describe their national character. Although there is not literal translation in to English, ‘Gutsy’ is often used as a close approximation, Sisu is said to be a grim, gritty, white-knuckle form of courage that is typically presented in situations where success is against the odds. It is displaying courage and resoluteness in the face of adversity, in other words, deciding on a course of action and sticking to it despite repeated failures.

Following the early end to my recent 5 Cities Challenge a friend shared this word with me, saying that he’d heard it and had thought of me. I’d written this blog before I left for that challenge, before it was disappointingly cut short, but I think it’s still relevant – particularly now I have heard about Sisu.

A couple of months ago I completed an FTP test and subsequently worked out my watts per kg – I have to say I wasn’t really surprised to find that I was on the cusp of Uncategorised and a Category 5 rider. I’ve always said quite openly that I’m not the best, strongest or fastest cyclist – I don’t really compare myself to anyone else, because I always just try to do my thing with a smile on my face.

So, does FTP matter?

Well I guess knowing, and then improving, your Functional Threshold Power (FTP) and your power to weight ratio that depends on what your goal is – for me I don’t feel the need to be in a category but I do want to be powerful, as a cyclist. Having now cycled some epic solo challenges from John O’Groats to Land’s End, the South Coast of England and most recently the Pure Three Peaks – I’d like to think I’ve gained a little understanding of my abilities and my limits beyond what the stats say.

Anyway, I’m not going to talk about something I don’t really know enough about – I’m not a competitive or real endurance cyclist or a professional athlete. I’ve been cycling less than 2 years so really, I’m in no place to talk about this. All I know is that if I want to take on bigger challenges then I need to get stronger and more powerful and actually FTP is as good a way as any to measure that development. Anyway, all that said what I wanted to talk about is reflected in my new found favourite word Sisu and also a quote, often misattributed to Albert Einstein, that goes;

In any sport there are periods where, no matter what your physical ability you will have to rely on your mental strength to get you through – grit, determination, perseverance, pursuit of passion call it what you will, it is that attitude or personality trait that can take you way beyond talent. To add another quote at this point;

“90 percent of performance is mental”

Which frankly is a cliché and a load of rubbish really, if it were true then you’d see Usain Bolt or Geraint Thomas sat on their asses all day. Look, I’m not going to sit here and blow my own trumpet or tell you you or I can do anything without training, of course you’re going to need to put your body to work – but it is important to realise that when you reach your perceived limits it will be your brain telling you to stop long before your body grinds to a halt. This is your body’s fire alarm, your brain screaming at you to stop before you do some kind of permanent damage.

So what is Sisu? What does it mean to have grit? For me it’s a lot of different things that can’t be measured in an FTP test –

The ability to suffer

Mark Beaumont, nearing the end of his record breaking around the world cycle, said; 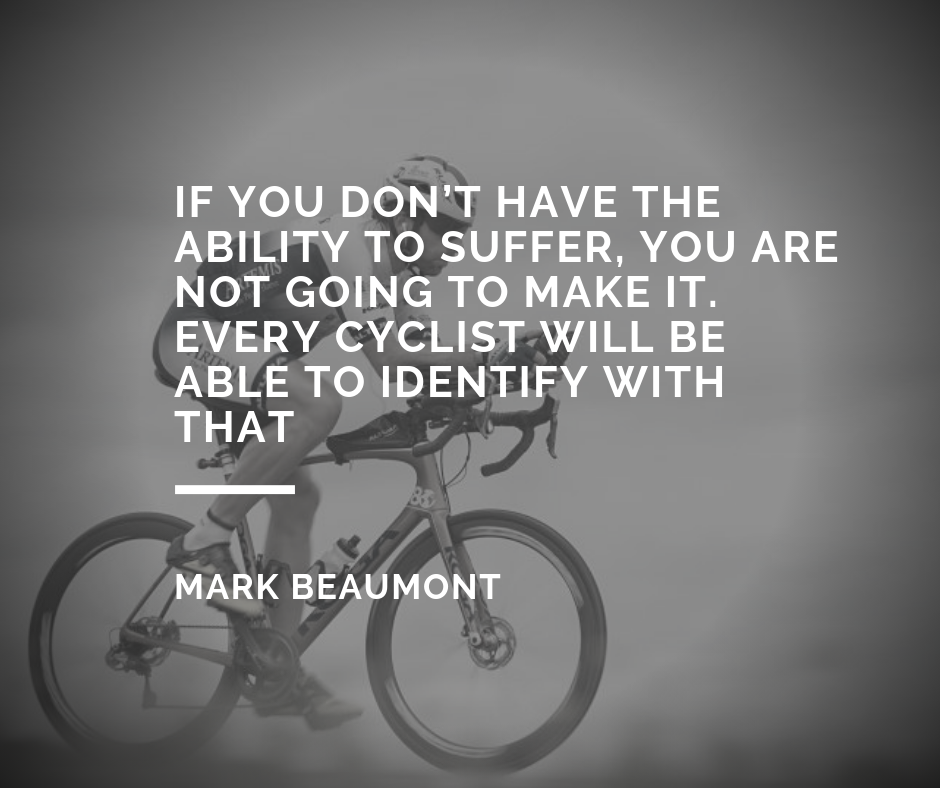 For me the ability to suffer comes from having a reason to suffer, because without that why there is nothing to keep you going. I’ve talked about the power of a why in a previous blog, but the essence for me is that when you’ve emptied your body the only thing left in there will be that why. Your goal – whether that is to win or simply to finish, to be the first to complete or to raise money – is one of the most important tools you’ll carry. It will be the tool that picks you up from the floor, the voice that says “don’t you dare quit” or the emotion that relights the fire inside you.

Coining the words of Alan Partridge, I’m of the opinion that grit can be determined by ‘Bouncebackability’. The ability and willingness to embrace failure, to learn from it and come back again and again. My tattoo ‘Hell or glory, I don’t want anything in between’ reflects how I’d rather try and fail than to not try at all. My biggest fear isn’t ‘What if’ it’s more ‘What if I don’t’ or maybe more ‘Why not?’. Clearly, the ability to manage fear, by whatever strategy (mine clearly being ignoring the actual practicalities of what I’ve committed to) can push you a huge way towards success. Fear can be debilitating at worst and having the courage to tackle it head on, to conquer that which holds you back is extremely powerful – empowering even.

Teddy Roosevlt talked about this way back in 1907 far more eloquently than I;

“It is not the critic who counts; not the man who points out how the strong man stumbles, or where the doer of deeds could have done better. The credit belongs to the man who is actually in the arena, whose face is marred by dust and sweat and blood; who strived valiantly; who errs, who comes again and again, because there is no effort without error and shortcoming; but who does actually strive to do the deeds; who knows great enthusiasms, the great devotions; who spends himself in a worthy cause; who at the best knows in the end the triumph of high achievement, and who at the worst, if he fails, at least fails while daring greatly.”

The ability to fight the dark

Adventures or competitions often mean a lot of time inside your own mind, which means that you need to be ok with yourself – part of my journey has been about doing exactly this – taking myself away, stripping everything back to so that it’s just me and the route ahead.

On the solo adventures you get these moments where you find yourself talking or even shouting to yourself and I always look back at these with a smile, because they are often the most random occurrences. I know on my JOGLE challenge I spent the vast majority of my 9, 9 hour days on the bike alone. That’s a hard thing to do, to go several long hours without talking. But, I’ve said many times that there is no moment that can’t be improved by taking some time to simply sign…loudly…and really, really badly. My personal choices are either Shake it off by Taylor Swift or more recently Shotgun by George Ezra.

But in all seriousness, I’ve made no secret of my battles with my own mental health and I certainly have no intention of breaking myself. But by owning the battle – by staring it in the face, I am trying to become more resilient, more at peace and mentally stronger. There is a certain beauty in opening that door and even if it just for one moment, conquering the darkest parts of your mind. That moment is certainly something that drives me.

To know when the end is in sight

Thinking about the end when the end is not in sight can be exhausting and demoralising – I’m sure we all have those daydreams before or during an event where we picture ourselves crossing the finish line. I’ve been in plenty of circumstances where you’ve miss judged where a check or end point is – the constant questioning and wondering ‘why am I not bloody there yet’ is draining. Not only that, but it takes something away from the journey.

After my first few days of cycling longer distances I learnt to break my days down in to blocks, whether that’s a number miles or hours, and try and focus on that period rather than the challenge as a whole. Keeping this mindful, in the moment approach, means you savour the journey you are on and where you are in the world rather than simply getting your head down and grinding it out.

Whether its delays, punctures or just poor planning – getting angry isn’t going to help you. As a ginger (redhead) I think we get a reputation for having a short fuse, it’s a characteristic in myself that’s taken a lot of hard work to dull over time. I know stress and the inevitable ‘blow up’ all too well. So when things go wrong, particularly when you’re tired, it is easy to let the emotions get the better of you – because the unplanned is frustrating but the unplanned can also be seen as an opportunity. A puncture for example is largely an annoyance, but viewed differently can be seen as a welcome break on a long ride, a chance to check the mechanisms, to refine your tyre changing skills – it’s a chance to remind yourself that ultimately, you have the ability to identify and fix the problem, providing you can stay calm.

A rather apt quote from Winston Churchill sums my point up nicely.

So to finish one last quote, from British Author Arthur Conan Doyle, that really struck a chord with me and I think can be translated in to exercise in general, not just cycling; 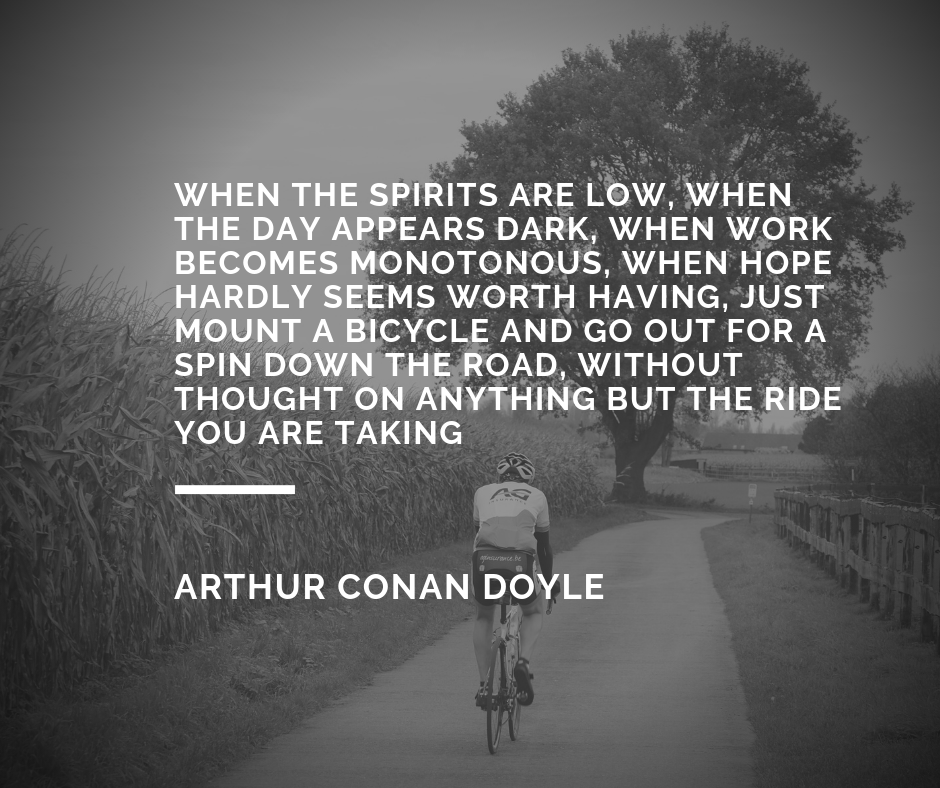 I couldn’t agree more at the moment. The challenges have drained me, they have taken something away from cycling – suffering isn’t fun. So while Sisu is a great concept and a personal attribute to admire we, I, mustn’t lose sight of the simple joy that riding a bicycle brings.