If you didn’t know, my name isn’t Miles. It has confused many people, so I figured while I am gearing up for the next two challenges in September and October, that now was a great time to say hi and tell you a little bit about myself.

My route in to sport is not a traditional one, I was never the first pick although I gave it all a go from football to rugby to high jump. Uncontrolled competitiveness and a lack of patience meant that I didn’t stick at anything long enough to be great at it, if the instant gratification of a win wasn’t there, I simply wasn’t interested.

As I got older sports became less and less a part of my life. My passion and drive for my career became consuming, long hours, stress and an unhealthy lifestyle combined in to a downward spiral. I had no balance and as a result, my physical and mental health declined and my marriage broke down.

So I decided to stop letting life happen to me, grab it by the proverbial’s and be the change I wanted to see in the world. That’s how I got here.

The journey so far

It all started with the Wokingham Half Marathon in February 2017. I started running at the end of 2016 and set myself a goal of running a half marathon.

I signed up to more and more events and from that created a series of 13 challenges, taking on one thing per month that he’d never done before.  So far we’ve raised over £2,500 for Make-A-Wish UK by running, walking and cycling over 2,500 miles.  The challenges have so far included Tough Mudder and the Bournemouth Marathon and culminated in a 950 mile unsupported solo cycle from John O’Groats to Land’s End in just nine days.  Most recently in June I completed the National Three Peaks Challenge by bike – 450 miles cycling between and 27 miles climbing each of the three highest peaks in the UK, in just 3 days.

Serious stuff over, for those of you who don’t know me here is 10 mildly interesting and amusing facts about me; 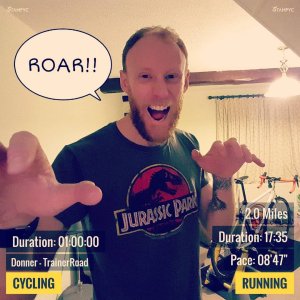