On Thursday 26 April I set off on my South Coast Sprint, a 400 mile solo cycling challenge which I aimed to complete in under 40hrs in aid of Make-A-Wish UK.

Having loaded up the bike I set off for Dover on Wednesday evening from Little Kimble station. Two trains and 3 hours later I arrived at the Travelodge in Dover just after 9.30 in the evening.

I managed around 4 and half hours sleep before my alarm went off at 3:30am. I’d got the bike ready the night before so it was a case of eating my porridge, drinking (well frankly it was just keeping down) two shoots of beetroot juice and getting some more palatable fluids in to my body.

Stepping outside the door of the hotel I realised my first error – I was wearing bib shorts and a short sleeves, albiet with light arm warmers – why didn’t I think about the early morning being cold!? Jacket on I starting out from Dover town at just after 4am, quickly finding my second error in that my battery saving efforts were going to cause me a bit of an issue. I’d turned the backlight off on my bike computer, meaning I couldn’t read the navigation in the dark. So after a few twists and returns to orientate myself I made my way out of Dover on the Folkstone Road. This avoided the main A20 and took me on a slow climb up to Capel-Le-Ferne before a nice fast descent in to Folkstone itself.

From here the route was pretty flat through to Hythe, Dymchurch and St Mary’s Bay where you leave the coast briefly to go out around a golf course. I stopped briefly here to admire the Victorian fountain and a quite beautiful sunrise.

From New Romney I turned back straight down to the coast road and on to Dungeness, which  is one of those strangely beautiful places. A huge flat expanse of shingle dotted with single story wooden cottages you can’t really miss that your there, its such a stark contrast to the rest of the South Coast. When you think of Dungeness I imagine you’ll think about the the looming Power Station, which you can’t fail to miss, however there are two (more attractive)  lighthouses, from behind the older I took a break. While the sun was rising fast so was the wind and this would not be a place I would have wanted to be cycling through in worse weather – it’s terribly exposed. Quick social media update, some carbs and off I go again.

I skirted around the edge of Rye, crossing the River Rother and heading on towards Winchelsea – where a wrong turn (yes, I can do this even with turn by turn directions) took me up to the Pipwell Gate, part of the towns 13th century defenses. I was half tempted to just carry on but as it was an up hill detour, I just turned around.

From Winchelsea its a flat run along the coastline to Pett Level and the second climb of the day up Battery Hill at the edge of Fairlight, an initial 8% gradient with a final kick at the end adding another couple of %. However, the pay off was a nice long descent down in to Hastings and another reststop on to the seafront.

From the Pier I stuck to the promonade cycle path rather than weaving my way through the traffic. After this it was in to Bexhill along the A259 before taking some residential roads back down to join the coast through Cooden Beach and Normans Bay. Much like Forest Gump’s box of chocolates, I am never really sure the type of roads I’ll end up on and my routing (from behind a desk) put me on a gravel cycle path which didn’t do my nerves any good with the fear of a puncture. I negotiated with care and managed to get out unscathed. At Pevensey I rejoined the A259 and rolled in to Eastbourne past the Harbour, the awesome looking Treasure Island Adventure Park and on to the Pier. 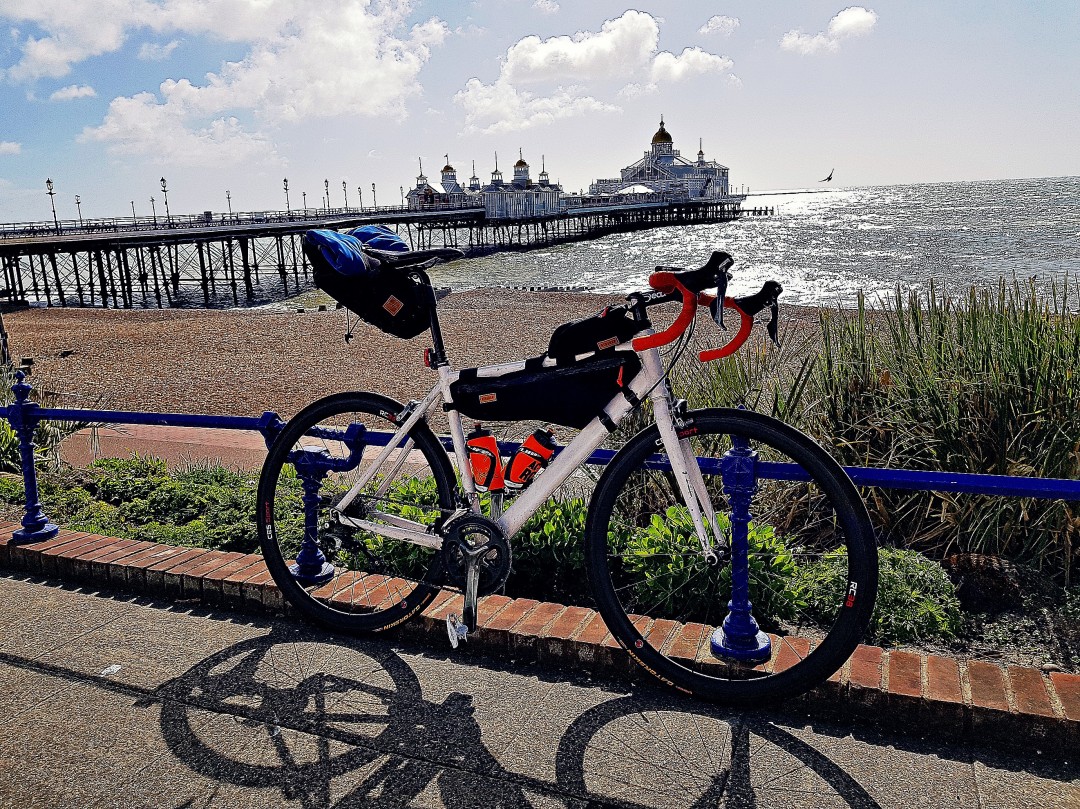 I’d decided to leave Eastbourne by following the A259 up to East Dean, rather than taking the Beachy Head Road. While its an 11% climb out it was shorter and sharper than the alternative route. I forgot about the traffic lights on the early part of the climb, which always make me panic a little bit – clipping in and trying to push on up a hill is still a slight challenge for me. Anyway, it’s definitely a test of the legs but as you pass the Golf Club on your right, you start to get a peak at the sea and the amazing view from the top of the Downs. From here its a short decent in to East Dean village and another climb up Friston Hill before the extremely enjoyable descent down to Birling Gap. Its a fast descent with a quick right and left turn at the bottom which tests your nerve and cornering skills.

One last climb on up from the narrow bridge over the Cuckmere takes you in to Seaford and another garage forecourt rest stop for me.

Seaford is the start of a number of similar sized coastal towns which create a link between Eastbourne to Brighton – I was retracing my old commute to work, having bought my first home in Seaford while working for Brighton and Hove City Council. After crossing the swing bridge at Newhaven it gets lumpy and the wind was just getting more and more fierce. My speed dropped massively and it was all in all a pretty energy sapping section – from Peavehaven and on to Rottingdean I could feel my shoulders burning from the effort to keep the bike straight in the gusting side winds.

Entering Brighton via Kings Drive is the only way to go in my opinion, taking in the Seafront and the arches in much the same way as the classic London to Brighton route does.

Brighton and Hove have an excellent seafront cycle path which I largely followed all the way through to Portslade, where I followed the entrance to the River Adur at Shoreham Harbour. After crossing the Adur on the A259 I found another Petrol Station for a proper stop and lunch break.

From leaving Shoreham the wind began to die back a bit so I got my head down and plugged away for what is a 50 mile and largely flat section. Another seafront and another Pier at Worthing and then I move away from the sea briefly to cross the River Arun at Littlehampton before cutting back through Felpham to pass through Bognor Regis, home of a rather tired looking Butlins. From here I angled my way north west up to Chichester and across the top of Chichester and Langstone Harbours. This top route takes you through a number of miles of busy town roads on to Fareham – but it was preferable to cutting down through Hayling Island and Portsmouth.

Just outside of Southampton I briefly joined a couple of cycle paths which provided a cut through Marchwood and avoiding the main A326. Approaching a road crossing I changed down the gears at the rear too quickly and the chain crossed and jammed. With both tired legs and brain I couldn’t unclip fast enough and comically fell sideways off of the kerb. After much flailing around I got unclipped and with the help of another passing cyclist set about getting upright and moving.

Unfortunately the fall had bent the rear derailleur and gear hanger in towards the wheel and effectively pinched the chain on to the largest chainring. With a bit of brute force we managed to get the wheel off and bend the derailleur back in to some kind of alignment. Unfortunately all this meant I’d lost the ability to shift the rear gears and was stuck on the second from bottom (nearly the hardest) gear.

After some mild swearing and berating of what felt like such an amateur mistake, I got myself back on the bike and started pedaling swiftly away from my shame. I stopped briefly again to try and see what I could do but it was clearly beyond roadside repair.

It was around 6pm by the time I’d got going again and was travelling through the bottom of the New Forest and on to Beaulieu, home of a famous motor museum and some amazing river side walks. From here its all B Roads, cattle grids and pony’s on to Lymington, where things started to get a little lumpy again – what would normally be easy climbs, particularly the short sprint out of Lymington, became battles of attrition. I felt like a Tour rider, standing on the climbs throwing my bike from side to side just to keep going up the inclines. This was the story for the remainder of the journey through Barton-On-Sea, Milford-on-Sea and in to Christchurch. Arriving in Bournemouth was a huge mental relief – I was close but  I was exhausted from the extra effort – it was coming up to 9pm and I just wanted to be done. The climb up Exeter Road, behind the BiC bested me and I had to stop and walk, it. I took the long way around, heading down towards Sandbanks and up around the edge of Poole Harbour and around Poole Park before arriving at the Travelodge just after 9:30pm.

I made several attempts to repair the bike but unfortunately it wasn’t to be and I couldn’t  continue on with two gears across the hills of Dorset, Devon and Cornwall.

I made a commitment to Make-A-Wish and you to complete this challenge, so there is a bit of ‘professional’ pride here, and as such I will absolutely return and finish what I started.

The South Coast Sprint – The Return will happen on Sunday 13 May.

Find and follow me live on the challenges at bit.ly/whereisguy

One thought on “The South Coast Sprint – Day 1”